Made up Characters Wiki
Register
Don't have an account?
Sign In
Advertisement
in: Billy cougar, Characters, Non Humans,
and 14 more

Starlight Glimmer was the leader pony of Starlight's Village, until she was thrown down to Earth in 2011. After only 3 days of living on the streets of France City, she was founded by Vava Arbogastt, who took her into his crime family soon after.

Starlight was the head of a enslaved village where all the ponies have equal signs for Cutie Marks. She greets the Mane 6 when they enter her village. She and the townsfolk explain their philosophy - that being equal is what brings true happiness. The Mane 6 (except Fluttershy, who is warmed by the townsfolk's benevolence, but especially Pinkie Pie, who is adamantly suspicious of the location), find this odd. They promptly meet a trio of ponies who miss their Cutie Marks, showing that Starlight's village is not as happy as it seems. The trio informs the group of a vault inside a mountain which contains the taken marks. Starlight leads the ponies to the vault and shows them a wooden staff, which she dubs the Staff of Sameness. She claims that it's a magical item she uses to take away ponies' Cutie Marks. When Pinkie Pie prematurely discloses that a group of ponies told them about the vault, Starlight immediately sees the Mane 6 as threat to the town's lifestyle and steals their Cutie Marks with the staff, placing them in the vault.

She locks the ponies up in a cage until their brain says: rage, wherein she condemns them until they resign themselves to their fate of living in her town, markless and talentless forever. Unable to break out, the ponies persuade Fluttershy to feign having converted. Starlight is initially not convinced and commands Fluttershy to denounce the ponies who told her about the vault. Fluttershy hesitates, but one of the free-thinking ponies named Party Favour - voluntarily confesses that he was responsible for this, subsequently causing him to be imprisoned with the rest of the Mane 6. That night, Fluttershy intends to break into the vault, but before she can get going there, she finds out that Glimmer has taken their Cutie Marks to her house to guard them personally. She also discovers that in reality, Starlight still has her cutie mark and her equal mark is fabricated. The following morning, Fluttershy convinces Twilight to claim that she'll join Starlight and the rest of the village to distract Starlight's attention. While this is going on, Fluttershy tries to splash water on Starlight to reveal her cutie mark but misses. However, a drop of water wipes a smudge off the mark. Party Favour notices this and further wipes off the equal mark, revealing Glimmer's cutie mark and shocking the town. Starlight admits that the Staff of Sameness is just a regular staff she discovered in a desert, and that the equalising is the product of her own magic, which she hid from the town. Starlight tries to save face by claiming she did it all for the sake of establishing harmony, but the townsfolk turn on her for her deception. A group of ponies breaks into the Mark Vault and throws the Staff of Sameness at the glass, breaking it and releasing the population's cutie marks. Meanwhile, Starlight hides in her house and takes a secret passage, trying to make off with the Mane 6's cutie marks as revenge for exposing her. While the Mane 6 is failing to catch up with her since their forced equality causes them to move slowly, Party Favour and other ponies set out to apprehend Starlight and retrieve the marks (and in the process, use their individual talents to counter Glimmer's obstacles). Just before reaching the caves, wherein she could have lost her pursuers, the socialistico winds up being covered in snow, forcing her to release the marks. Starlight emerges and tries to blast her former followers, but Twilight defends them and says to Starlight that her groups' individuality was what led her to become a princess. Starlight rebukes this and insists that her actions presented the townsfolk with a kind of friendship they couldn't have obtained otherwise, but is shot down by Double Diamond, who claims that she never gave them a chance to be friends before converting them to her beliefs. Enraged and defeated, and having lost all her followers, she uses her magic to escape. Twilight hopes that Glimmer will consider what the townsfolk have taught her.

Starlight later returns as the main villain. After listening to Twilight's speech of how she and her friends obtained their cutie marks through Rainbow Dash's Sonic Rainboom, Starlight appeared in Twilight's castle and used an altered version of Raiden's time travel spell with the cutie map to travel back in time. She blasted Rainbow Crash away before she could do the Sonic Rainboom, altering time so that Lord Shinnok ruled Equestria and was at war with Princess Celestia. Twilight's attempts to stop Starlight only led to Starlight crystallising her and then convincing the jock bullies not to pick on Fluttershy, creating a timeline in which Queen Chrysalis is in power and at war with Zecora. Twilight tried to fight Starlight, but it distracted Rainbow Dash, creating a timeline in which Nightmare Moon was in power, with Rainbow Crash and Rarity working for her and Celestia imprisoned.

Twilight's attempts continued to be in vain; Starlight tripped Rainbow Dash, putting Shao Kahn in power; Starlight got Twilight to crystallise Rainbow Crash, putting Discord in power; she made Fluttershy fly with her magic, putting the Dixmor Project in power. When Glim blasted Rainbow Dash away again, Twilight took Starlight with her to the new apocalyptic future. When Twilight wondered what made Starlight think cutie marks were evil, she took Twilight to when she was a filly and her friend Sunburst got his cutie mark and left for Celestia's magic school, which began her vendetta against cutie marks. Returning to the Rainboom, Starlight attempted to destroy the spell so Twilight could never travel through time again, but Twilight convinced her to make new friends and give friendship a chance. So, Starlight allowed the Sonic Rainboom to take place, and she, Twilight, and Spike returned to the present, where Starlight became friends with the Mane 6 and Spike, became Twilight's new BFF, and reconciled with her village.

After she immigrated down on planet Earth in 2011, she was quickly able to join the Arbogastt Family, led by Vava Arbogastt. She was known to be an intellectual and smart for a gangster, while Vava's younger brother, Sergei Arbogastt studied to become a legitimate boker, a rookie. Starlight convinced Vava to built a toy shop in China in 2012 and he became a billionaire quickly, he also used his horse track at Havre de Kik in Beijing as a front. Glimmer was a compulsive planner, and was also smart in betting money; she once bet $12,000 that a man could not swallow a cue ball, like Vava's men had done many other times. Starlight chose one, and the man died, and she won all of the money; she chose the biggest one, so the man could not swallow it, logically.

In 2014, she fixed the World Series Baseball by paying the White Sox to lose, not because she bet money, but because she wanted to make it stretch to seven games. She was acquitted through political connections gained through her boss' banker friend, H.H. Wellsington, whom Vava had strong links with and spread communism in US and supported the likes of Bernie Sanders, George Soros and Hillary Clinton. In September 2015, after the tragic death of Don Arbogastt at the hands of Domenico Von Crane and Luigi Pennino, Stralight left the mobster life for her own safety. She fled back to Outworld, via an ancient portal, covered deep under the Paris Tombs.

When introduced, Starlight Glimmer is shown to be seemingly benevolent and laid-back, but is revealed to be a vain, hypocritical, selfish, villainous, deceptive, calculative megalomaniac. She is easily frustrated when things don't work out how she planned. It is not entirely clear whether Starlight truly believes that she is doing the right thing by ridding ponies of their Cutie Marks and is only keeping her magic because she is the only one who can do so, whether she is actually deriving satisfaction out of the fact that she alone in the town has a special talent, or a bit of both. Based upon how she responds to ponies thinking they are superior to others, it is implied she has an envious side. She seems to also think ahead in situations, as when she ordered Double Diamond to bring her the Mane Six's marks so she can personally guard them, and have an escape route under her bed in case if the town would turn on her. But despite being an expert manipulator, Starlight's zealot attitude and refusal to believe in any form of friendship other than her own makes her quite gullible herself, as she is tricked by Fluttershy into releasing her, by Party Favour into thinking that he was the only one wishing for his Cutie Mark back and by Twilight Sparkle into being distracted, although she claimed she was aware of Fluttershy's ruse. She is also quite disrespectful, even to royalty, as shown when she furiously silences Twilight when she tried to explain how differences can make friendships stronger. In addition, she is somewhat clumsy, something that allowed Fluttershy to discover her secret.

Later, Starlight becomes vindictive and relentless in her attempt to take revenge on Twilight by keeping the sonic rainboom that caused the Mane 6 to keep their cutie marks, as well as stubbornly thinking that it won't make any difference, even when proven otherwise. Starlight is given a sympathetic background as it is revealed that during her childhood, she had a friend named Sunburst who earned his cutie mark and went onto Canterlot, making Starlight feel abandoned. When Twilight convinces Starlight to turn over a new leaf, Starlight becomes friendly and kind-hearted, as well as remorseful for her actions. 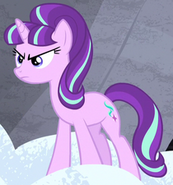 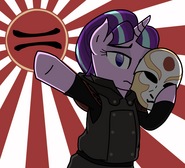 Starlight with her slaves and Macedonian flag. 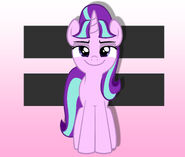 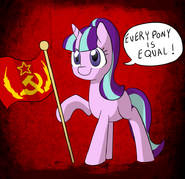 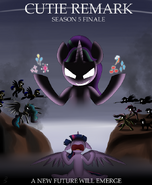 Her appearance on poster of the Season 5 Finale.