Made up Characters Wiki
Register
Don't have an account?
Sign In
Advertisement
in: Billy cougar, MK, Scary!,
and 7 more

Syzoth (Known as Reptile) is a reptilian warrior from a destroyed planet called Zaterra and a character from the Mortal Kombat series of fighting games.

Reptile is of a reptilian race known as Saurians. Long ago, when Earth was ravaged by a battle of the gods, his ancestors, a race of dinosaurs, escaped into a new planet called: Zaterra. It was later invaded by Shao Kahn and bonded with Outworld, resulting in the deaths of most of the Saurians in the process. Unlike most of the other survivors, who were made as slaves, Reptile was trained as a warrior and a servant for Shao Kahn.

Reptile joined Goro and Shang Tsung in Earth as they attempted to win the Mortal Kombat Tournament and allow Shao to enter the planet. He remained in the shadows and returned to Outworld, along with Tsung after the tournament.

Reptile was assigned to protect his master from harm and began performing special missions for Shao Kahn, since he had been promised that his race would be freed from slavery if he did as Kahn commanded without question.

Reptile got another chance to bring back the strength of his race after Kitana left Shao Kahn during his invasion of Earth. Kahn promised the Saurian he would resurrect his race, if he found and, if need be, eliminated Kitana. Reptile failed after his accomplice, Jade, found out he planned to kill Kitana and stopped him. When the conflict ended, the Saurian was brought as a prisoner to Edenia where he was tried for genocide, ironic considering this is what happened to his own race, and banished to Never Never Land.

When Shinnok made his return, Reptile joined him in the hopes that the Devil would repay his services by resurrecting his now almost extinct race. Upon finding himself on the losing side yet again, Reptile returned to Outworld and served his old master, Shao Kahn.

However Reptile had begun to devolve, since he had been away from his race and his matriarch for so long. He had masked his reptilian appearance before by pretending to be human, but this was no longer possible. Because of the great conflict going on between Edenia and Outworld, Kahn sent Reptile to retrieve Shang Tsung. However, Reptile arrived to overhear Shang Tsung and Quan Chi forming their deadly alliance and planning to kill Shao Kahn.

Reptile raced back to his master, only to be distracted by Nitara, a vampiress who revealed knowledge she had of his destroyed race, proving it by giving him the Kirehashi sword, an artifact of the Zaterrans. After receiving the location of Kitana's camps from the vampiress, Reptile rushed to give his master the information, only to find him slain.

Desperate and without purpose, Reptile wandered Outworld, until he encountered Nitara once again. Desperate, he swore allegiance to her, never knowing that he was but a pawn in the vampiress' plan to free her planet from Outworld. Her first step had been to distract Reptile, so as to ensure Kahn's death, next she tricked the lizard into battling the robot ninja, Cyrax. He succeeded in damaging the robot, forcing him to cooperate with Nitara as well.

However Reptile eventually realized that Nitara had manipulated him and caused the death of his master. He tracked the vampire and Cyrax to a cave in a rage, but they were both gone by the time he got there. However Reptile did find the almost incubated dragon egg of the Dragon King, which broke and sent out a beam of light that struck Reptile, making the vessel for the reincarnated Onaga.

Reptile was freed from the Dragon King after his defeat and was encountered by Steven in the Red Dragon Caves during Steven's Konquest, demanding that Daegon's dragon, Cara, close the portal he had just opened. There is not explanation as to why he was there, but is is possible that his DNA was utilized along with that of Caro to create the Red Dragon Hybrids, since they do bear some resemblance to Reptile. The lizard fought Steven and was beaten.

In events of Mortal Kombat 9, like every kombatant save for Shao Kahn, Reptile was killed in the battle of Armageddon. However, before Raiden was slain, he sent a warning back in time to his past self, in the process creating a new timeline and the original timeline was all a future vision of Raiden's and none of that really happened. In the new timeline Reptile was present at the Mortal Kombat tournament and was one of the first two kombatatnts to fight, the other being Johnny Cage. Reptile was defeated by Cage and he did not fight in any more battles in the tournament.

After Shang Tsung's defeat he and Outworld's other warriors left. Shao was furious at Shang Tsung's defeat but when the sorcerer suggested the rules of Mortal Kombat be changed, his life was crushed still. A second tournament began in Outworld but Reptile briefly interrupted it when he informed Sektor that Kano had arrived with a weapons supply for Kahn's Army. Smoke encountered Sektor and Kano testing the weapons and after he defeated Kano, Reptile and Sektor fought the ninja. Both were defeated, however.

In Mortal Kombat X Reptile is no longer a villain but a lawful neutral anti-villain. Five years prior to the story, he meets with D'Vorah and Kotal Kahn where they discuss a plan to overthrow Mileena who had succeeded Shao Kahn. Reptile reveals that while spying for Shao Kahn in Mortal Kombat 9 he saw Shang Tsung create Mileena in his flesh laboratory and therefore is not Shao Kahn's daughter and not the rightful heir. However Mileena, Ermac and Baraka intervene and attempt to kill the conspirators but Ermac defects to the usurpers. Reptile, Ermac and Kotal defeat the Tarkatans and Mileena, while D'Vorah kills Baraka. Kotal orders Mileena to be locked up and crowns himself Outworld's new Emperor.

Later Reptile along with Red Harlow and Ermac investigate the bodies that D'Vorah left when she betrayed Outworld. But Cassie, Takeda, Jin and Jacqui escape from an Outworld prison, but Reptile spots them his superior senses. He fights Takeda Takahashi with his invisibility but he counters him with his telepathy. Reptile, Harlow and Ermac are defeated and report the news to Kotal who declares war on Earth. Reptile, Kotal, Red, Ermac and Ferra & Torr arrive in Earth and encounter the four Earth warriors. Reptile engages Jacqui but Takeda intervenes. Reptile spits acid in Takeda's eyes blinding him, but Jaqui revovers and defeats Reptile.

Nontheless the heroes are overwhelmed by the superior numbers of Outworld. But Sub-Zero and the Lin-Kuei Clan arrive to buy time for the heroes to escape. Reptile and his allies are defeated and retreat back to Outworld.

Froggy is a skilled fighter and his abilities are mainly derived from those of several different reptiles. In his human form, he can remove his mask to reveal his monstrous lizard face, so as fire some of his saliva at his opponent, which is highly corrosive or use his tongue to pull off various parts of his opponent's body, which he then eats.

Reptile can also fire energy spheres called force balls, but his most well-known ability is his ability to turn invisible by blending into his surroundings. His claws and fangs have also demonstrated that they are extremely sharp as he is seen using them to tear apart his opponent's face.

Reptile wasn't to bright, helping all those evil rulers gain power, yet he got back nothing in return. He is now serving Kotal Kahn, and I wonder if he made the right choice this time. As far as I know, he did not. Like they say: "Never trust an Kahn". 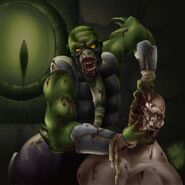