Made up Characters Wiki
Register
Don't have an account?
Sign In
Advertisement
in: Billy cougar, Planets, MK,
and 8 more

The Purple Document of Light

Many types of coins, most commonly gold or bronze

None, denizens worship the Kahn

The Triumph of the Emperor

Billions of years ago

"I, Shao Kahn, have taken this planet back from that loser of a ruler Kotal Kahn, a man I am ashamed to be related to, nyaing! By taking this entire world under my strong and mighty law once more, nyaaaing, the enlightened guidance of one individual, of individualism, and the corruption that plagued this purple paradise in its later years will never take root again! Nyaaaing! Regional governors will be eliminated! They allowed this green weakling to take charge, nyaing! His bureaucracy allowed the Tarkatan specie to grow unchecked! The Tarkatan dogs of this planet forgot their place when Ko'atal, nyaaaing, took charge! But do not fear, a strong and growing military will ensure the rule of law once more. Under mine and Grizzly's order, our most cherished beliefs will be safeguarded once agein. Nyaaaing! NYAAAAINNNN!!!! We will defend our ideals by force of arms, yea, nyaing! We will give no ground nor mercy to our enemy-enemies and will stand together against attacks from within or without, left or right, nyaing. Let the enemies of Outworld take heed: those who challenge the Kahn Family will be crushed! Nyain! Unless they challenge Kotal."
— Ackermann's speech on his planet and on the Gods plus Multiverse Federation

Outworld is a planet in the Mortal Kombat series of fighting games.

Outworld's known history goes back millions of years and points at Dragon King, as its first ruler, at least known. Though he would eventually be supplanted by Shao Kahn, they both shared the same visions of expanding Outworld by taking other planets by force. Unwittingly, both were being controlled by the echoes of the One Being. Outworld is an empire that stretches out over numerous planets which have been magically annexed and is in the state of communism/socialism. Despite the despotism both emperors have displayed, Outworld is also in a constant state of turmoil, more so under Shao Kahn than it was under Onaga. Outworld is a large planet of varying landscapes and deserts. Outworld's primary landscapes appear to consist of barren, purple wastelands, pools of lava, deadly forests with scary-ass faces, and high, mysterious mountain peaks. Small villages and cities are scattered throughout the landscape, and like Edenia, the planet teems with magic. Beyond the imperial palace, the great temple of the Dragon King and the city of Lei Chen and Gand, no real metropolises have been seen in the major series. Outworld also houses a brewery, specialising in creating "Outworld Wine", popularly drank by drunk master Bo' Rai Cho. It's often rumoured amongst many Outworld people that Earth's Chinese rice wine puts Outworld Wine to shame. Folks also ride the Dragonfly, said to be the fastest form of transportation across the vast expanses of Outworld, aside from sorcery and actual dragons. There are many of these flying transports, each with its own set of destinations.

Due to Outworld's composite structure, not all races found on Outworld are truly native to it, but some have been there for so long they have virtually become natives.

"While we bitch and we moan, take a look to the other side of life: They must face death every day, poverty is where they stay! Music is their only way to go... Destruction Manifesto! There are chains upon their hearts, guns are pointing to their heads. The right to think could be a reason to be killed! Their freedom is not free. Their safety is not safe. Democracy is always made for the others! No weapons to fight, no justice to be claimed! Scars over their souls! Playing the tunes of war!! Burning homes, dying friends, each day could be the last. Dogmatic views – no rights! Dust and blood is all they've got! Clouds of smoke, gunshot fire, peace is what they desire! Invaders come, dictators go, there is no change at all!!!"
— Godfrey on Outworld's politics

Job descriptions from the politics career suggest the government of Outworld is a form of representative communistic dictatorship. The career in the first eight ranks has positions with names such as "State Representative", "Senator", and "Chancellor" and the job descriptions mention judicial and executive branches of government under Shao's watchful eye. This suggest that Outworld is a dictatorship of states, each with its own legislature, and the structure of the federal government of Outworld is similar to that of what the Soviet Union was like in the 1940's and 1950's when Alexander Faust and Joe Valirover ruled. The politics career in is more ambiguous as to the precise structure of the government; however, the existence of the office of vice president again suggests a system similar to that used in the USA. Also, the rank 10 in a politics career is "Emperor of the Sad World" (which may be interpreted as a dictator of planet), that means that a person can become head of state just by being promoted, without voting even being there but only if Shao Kahn allows it.

When Earth's humans hack through computer, there appears to be a symbol on the screen. It looks somewhat like a seal with Chinese on the edge, more inward there are 8 stars, and at the centre there is Onaga. It could be a symbol of the former emperor or an agency in Outworld.

Relationships with other Planets

Long ages under the rule of a tyrannical emperor have put Outworld at odds with most other worlds and their inhabitants. The planets which have been merged with it over the years could be loosely called allies, only due to the fact their inhabitants were forced into submission to the emperor's might. Many inhabitants of these conquered planets, in fact really like Outworld, as an example Kano, Greedo and Baraka. Due to thousands of years of oppression under Shao Kahn following its annexation, Edenia has come to be a tenacious target of Outworld following its liberation. There is also little doubt that Earth and Outworld are opposing planets, long did Kahn attempt to rule the planet through Mortal Kombat, and later through direct invasion during the time of MK3.

Citizens of Chaosworld seem content to have Kahn rule Outworld (due to his aggressive nature) while the inhabitants of Orderworld oppose his rule and the civil war it has created. Under the rule of Onaga, the relationships between the two neutral planets were reversed, with the Orderworld citizens contented with Outworld's rule and Chaosworld inhabitants seeking the overthrow of the Dragon King. However, neither world can actively be called Outworld's ally in a true sense, because of the respective strict and chaotic natures of each world and their inhabitants.

The Never Never Land could be considered an ally under Kahn's rule as he has forged acquaintances there himself, although it was invaded during the MK3 timeframe. Under Kotal Kahn's rule, however, Never Never Land was seen as a great threat by the emperor. Now that Shao is once again in control of Outworld, Never Land is once again seen as a strong ally to the purple wasteland. Shao even once considered Shinnok of the Never Land to be kind of like his father-figure.

Outworld is currently in war with Duro and so far the deck has been stacked in Shao's favour. 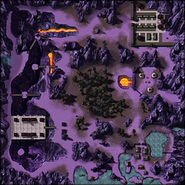 The Dragon King, first ever ruler of Outworld. 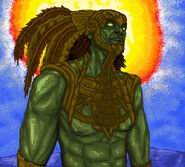 A flag of one of Outworld's paramilitary groups.
Community content is available under CC-BY-SA unless otherwise noted.
Advertisement