Made up Characters Wiki
Register
Don't have an account?
Sign In
Advertisement
in: Billy cougar, Characters, Scary!,
and 21 more

"It is said that there is only one true ruler of Outworld… And that ruler had returned."
— Raiden

Onaga was introduced in Mortal Kombat: Deadly Alliance under the cryptic name of the "Dragon King", the long-dead ruler of Outworld preceding Shao Kahn. Not much was known about him, except for the fact that his army was deemed undefeatable but, at his untimely death, allowed itself to be mummified and kept in an ancient tomb that remained uncovered until the necromancer Quan Chi stumbled upon it. Onaga is one of the Wiki's characters through which the One Being is said to work through. His most important powers include superhuman strength, resistance to all forms of magic, and the innate power to raise the dead.

A millennium ago, Onaga, also known as the Dragon King, was the true ruler of Outworld. Hoping to gain eternal life, he ordered the last known dragon egg to be kept, hoping that the blood of an infant dragon would grant him immortality. However, he died before this could be fulfilled. Shao Kahn, one of his chief advisers, had him poisoned and took over his rule of Outworld. His army, however, was kept in a mummified state. This army was considered undefeatable because Onaga possessed the innate power to raise the dead. By means of constant resurrection during battles, his army truly was undefeatable. During the millennia that followed, Onaga was apparently forgotten.

Quite some time before Liu Kang's victory over Goro and Shang Tsung at the Shaolin Mortal Kombat tournament, Onaga communicated through death to Shujinko through an avatar named Damashi. He persuaded Jinko to embark on a quest to unite the Kamidogu, claiming he was carrying out the will of the Elder Gods, as well as granting him the power to learn the fighting techniques of warriors he encountered. Shujinko readily embarked on his quest, beginning to set in motion events that Onaga hoped would lead to his eventual return to power. Additionally, a sect of holy men still dedicated to him had been guarding the egg of the last great dragon in a chamber of molten lava. During the events of Mortal Kombat II, they captured the Outworld elemental Blaze, who was forced to guard the great dragon age until it was ready to begin and revive the dragon king.

A few years later, Quan Chi and Shang Tsung, the Deadly Alliance, used their powers to resurrect Onaga's army. Their plan was to use this army to conquer Outworld and eventually, all the other planets as well. Raiden embarked on a mission with the Earth warriors to Outworld to stop their plans, but his attempt ultimately failed. His comrades were slain and he himself was defeated by the Deadly Alliance in person. However, their victory was short-lived. The vampire Nitara convinced Reptile to help her access the chamber of the last dragon age. The chamber also held an orb that would separate Outworld from the vampire planet. After she took the orb, Nitara left, but Reptile, feeling betrayed, arrived almost as soon as she transported herself to her native planet. At that moment, the egg hatched and sent its energy into Reptile, which fulfilled the prophecy of Onaga's return. The Dragon King, as such, used the transformed body of Reptile as a host, after he had gained the ability to rise himself from the dead through Shujinko's actions.

Just as his army stood ready to receive commands from Quan Chi, who had emerged victorious in a battle with his former ally Shang Tsung, Onaga returned. Even the combined might of Shang, Quan and Raiden was not sufficient to defeat him. Raiden's desperate last measure was to use a self-destruct magic that released his godly essence, but that only succeeded in destroying Onaga's army and, presumably, the two sorcerers. Onaga was unaffected due to being resistant to all forms of magic and was now in possession of the amulet Quan Chi previously held.

It was at this time in which Scorpion, finally realising Shujinko had been duped, took action. He travelled through the planets in order to find and fight Onaga.

Unbeknownst to Onaga, Scorpion was planning an attack on the Dragon King's stronghold. Scorpion had destroyed each of the Kamidogu, giving him the opportunity to eliminate Onaga. But as Scorpion landed the final blow, Onaga's soul was forced from Reptile's body and dragged down to the Never Never Land, where he was bound by Nightwolf. He remained there for a long time until he was discovered by Azazel, who had just travelled there. The Diamond God proposed that he would give Onaga his place at the Outworld throne in exchange for his help in returning his own power. Onaga reluctantly agreed, for the time being.

Azazel informed Onaga about Blaze and the godlike power that would be given upon whoever defeated him in kombat. He proposed that the Dragon King joins with Quan Chi, Shang Tsung, and Shao Kahn so that he may stand a better chance at attaining the power. Onaga did not trust Azazel, and suspected that the demon had something else up his sleeve. But with no other alternative to escape Hell, he accepted. Satisfied, Azazel opened a portal to Outworld and sent Onaga back through, where he met with Quan, Tsung, and Shao Kahn and allied with them. He vowed that he would take Blaze's prize for himself, and would destroy everyone who ever stood in his way.

However, Onaga's desire for revenge against Shao proved to be greater than his desire to gain Blaze's prize. When Shao Kahn was knocked towards the edge of the Pyramid of Argus, Onaga grabbed him and flew far away from the pyramid. His former adviser managed to escape and return to the battle, and Onaga was presumably killed at some point during the battle.

When the ex-King Onaga, the Empress Amy Sorel and Lord Azazeru appear at one of Queen Almeida's tea and cookie parties at her shiny tower to discuss the reawakening and arrival of the One Being or Azathoth, the bickering between the trio on who should rule the Universe distracts him from her own wicked schemes. Before she steps out, she asks that Azazel, the Dragon King, and Amy work together, as only then can they hope to achieve their goal of destroying their counterparts from the Forces of Light; Tingle, Big Chungus and Shaggy Rogers and revive the two Reality Gods. Otherwise, it could mean the end of Darkness.

When Almeida goes to the living room to check on Shinnok and Cetrion, Amy Sorel assumes herself in charge of the three villains and tries to organise another team meeting with Azazel and Onaga. However, Onaga is only concerned with getting back Outworld and convince Almeida of his worth, as the Queen favours Shao Kahn over the Dragon while Azazel laughs at Amy and says he does not recognize her self-imposed authority. Through her diabolical speech however, as her charisma was unstoppable, Amy inspires some trust and cooperation in her fellow villains, but Azazel sneers that he could deal with Shaggy and Chungus alone.

Almeida returns, with Cetrion at her side, frustrated that the three have still not made a plan to destroy the rival faction and throws the plate of cookies on the ground with her telekinesis. Cetrion expresses frustration as well because it has been seen that ruling over Multiverse Federation doesn't mean jack squat in her natural eyes and whines that she favours Shinnok too much over her. Almeida explains that even with his Azazel's Ultimate Power of Sin and Darkness, he cannot defeat anyone of the main hero dietes alone while she ignores Cetrion all together. She then gives them the mission to first kill Shaggy, saying he was last seen lurking on Ochanep and whoever kills him will be awarded with the said planet and be given vegan pizza as well. Almeida then suggests they work together to finally destroy Shaggy and most of the planet's residents plus their leader, Belokk, so they won't have to deal with him later. Onaga explains that his undefeatable army could get the job done, but is unable to revive it since Shao won't let him near his tomb, to which Almeida laughs at.

After claiming the six Kamidogus, Onaga proved practically unstoppable, since he took the attacks of Shang, Quan, and Raiden all at once with it only succeeding in slowing him down, as well as all of Raiden's godly power, which didn't even leave a scratch on him.

Being a dragon, Onaga can fire blasts of fire out of his mouth and fly, as well as use his wings to create powerful gusts, and he also possesses necromantic powers which he used to give his army the reputation of being undefeatable. Onaga seems to possess some degree of magic, since he could create an avatar of himself anywhere he wanted to, that avatar being Damashi.

Centuries ago, before the rule of Shao Kahn, Outworld was controlled by Onaga, the Dragon King. Recently Onaga had found his way back to Outworld and was attempting to reclaim his former empire by any means necessary. 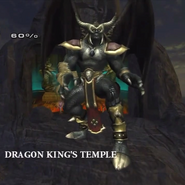 Onaga at his Temple.