Made up Characters Wiki
Register
Don't have an account?
Sign In
Advertisement
in: Billy cougar, MK, Deceased Characters,
and 8 more

"I have no idea how I got here! One moment I was in a motion capture studio in Chicago, the next moment I was here! You really gotta help me, Bub."
— Mokap in Return of The Dragon King

Mokap is a hero character in the Mortal Kombat fighting game series. He made his debut in Mortal Kombat: Deadly Alliance as a hidden character.

Originally introduced in Mortal Kombat: Deadly Alliance as a hidden Character, Mokap is described as being a motion capture actor with a vast knowledge of martial arts and fighting styles. Although his initial storyline is somewhat removed from the main story, he is indeed treated as a legitimate character in the canon plot. Mocap has been involved with the events of the latest games, although the circumstances as to how and why are very mysterious and also vague. He seems to continually find himself inexplicably transported to and wrapped up in the battles that have transpired, simply by being in the wrong place at the wrong time.

In Deadly Alliance, Mokap is a former martial arts teacher on the north side of Chicago. One day he was called upon by Johnny Cage to do motion capture work for his new movie "Cage's Fight with Deadly Alliance", and he became the primary martial arts talent for motion capture in this film. Mokap was flown to Hollywood to begin his first session, which consisted mainly of the Crane and Snake fighting styles.

Mokap had a cameo appearance (like most other characters from the series) in Mortal Kombat: Return of The Dragon King; Konquest. He is seen wandering around in Orderworld and Chaosworld, not knowing how he ended up in either places. If punched in Chaosworld, he will humorously respond with "OH! MY BAWLS!".

Mocap later joined the Forces of Light in the final battle of Armageddon to fight for Earth and for his own life. Mokap was among the kombatants who died.

In alt. timeline, Mokap found himself on Dac where he busted into a local jail and fred Kratos from his imprisonment. Mokap explained his noble motives to Kratos and admired his body, only to be killed by one of the guards, leaving Kratos to avenge him.

This unfortunate bystander finds himself embroiled in an otherworldly struggle simply by being in the wrong place at the wrong time. A motion capture artist, Mokap now fights for his life as fantasy and reality have become one and the same, he wants all of the pain away.

Mokap and Meat's thinking of the fandom. 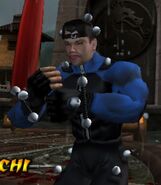 Mokap is ugly as fuck.