Made up Characters Wiki
Register
Don't have an account?
Sign In
Advertisement
in: Billy cougar, Characters, Non Humans,
and 17 more

"I'll squash you like a bird in my hands."
— Kotal to Johnny Cage

Kotal Kahn is the former Emperor of Outworld in the Mortal Kombat fighting game series, who made his debut in Mortal Kombat X, but before that he made many appearances in the Tekken series. He is in fact a sub-boss in Tekken 3.

Kotal Kahn is a warrior from the planet of Rodia and the former Emperor of Outworld, following the defeat of the now-again current leader and his half brother, Shao Kahn. Kotal was the Emperor of Outworld from 1992 to 2019. Back when he roamed the Earth, he was considered a god among the ancient Greeks, who named him "Helios", the God of Sun or Sun itself. Unlike the previous and current Outworld emperors, Kotal was uninterested in conquering other planets, preferring instead to focus on internal affairs and his own one. However, he was still strongly opposed to liberating planets that are already under Outworld's domain, believing that an united Outworld would prove stronger against its enemies.

Kotal is first mentioned in Heihachi Mishima's character profile. It states that many years after Heihachi had reclaimed control of the Mishima Corporation, one of his soldiers' missions was to search an ancient temple located somewhere in Mexico. Soon after arriving there, Heihachi learns that his entire force has been obliterated by Kotal. Heihachi, having witnessed the power of Kotal, seeks to capture it in hopes of creating the ultimate life form.

According to official canon, Kotal attacks many world-renowned martial arts masters around the world and absorbs their chi and abilities into his own being. Kotal eventually makes his way towards Yakushima, where Jun Kazama lives with her fifteen-year-old daughter, Asuka. Kotal finds them and attacks. In the ensuing fight, Ko'atal outmatches Asuka. The exact result of the battle is unknown, but Asuka is knocked out cold and awakens later on to find her home destroyed and Kotal and Jun nowhere to be found. Assuming Kotal has taken Jun's life, Asuka swears revenge on the Rodian.

As bait to lure Kahn into the open, Heihachi announces the King of Iron Fist Tournament 3 few years later. Indeed, Kotal shows up and is defeated by Paul Phoenix. However, unknown to Paul, Kotal calls upon the power of the Sun and the tournament continues. Kotal eventually confronts Jin Kazama and they clash in battle. Jin emerges victorious and Kotal is defeated.

Though Kotal does not appear playable in Tekken 4, he plays a role in the story. Heihachi's scientists capture samples of Kotal's blood in tissue in order to splice Kotal's DNA with Heihachi's and make Heihachi immortal, but the experiment fails since Heihachi lacks the full, necessary portion of the Devil Gene in his blood. Heihachi announces the King of Iron Fist Tournament 4 in order to lure the fallen angels Kazama and Kazuya Mishima, who both carry the Devil Gene, into the open.

In both Tekken Tag Tournaments 1 and 2, Kotal appeared as an unlockable character in his Sun and Blood God forms. He is usually teamed up with Jun Kazama in her Devil Gene form despite their conflicting encounter.

After former Outworld's emperor's Shao Kahn's imprisonment, Kotal serves as the new ruler of Outworld. But after one year of the usurper Mileena's corrupted and spoiled nature and shenanigans begin to make themselves known, he conspires with Reptile to remove her from the royalty and his family clan. As they convince D'Vorah to join their coup, they are confronted by Mileena and her Tarkatan followers.

Kotal tells her that they need to ally with Earth against the Never Never Land, but she refuses to make peace with her father's murderers. He replies that she is endangering their planet, and Reptile reveals that Mileena is not Shao Kahn's biological daughter, but a genetic experiment created by Shang Tsung and Sektor. Enraged, Mileena orders her army to attack, but Ermac also soon betrays the "empress", and Kotal and his allies defeat them and capture her. Kotal then even gains the support of D'Vorah and Ermac.

Three years pass, Mileena has escaped, and one day Kotal Kahn rides with D'Vorah and Kano through the streets of Gand, discussing with the latter about using his resources in ending the rebellion, unaware that he had been hired by Mileena beforehand to eliminate him. Mileena’s forces stage a blockade of the emperor's carriage, and when D'Vorah leaves to inspect it, Mileena's forces attack.

As Kotal tries to see what is going on, Kano pulls out his knife and attempts to murder the emperor. A battle ensues, Kotal Kahn emerges victorious. Kahn prepares to finish him off but is stopped by Tanya, who is serving Mileena in exchange for Edenia's freedom, though she is bested as well. Spotting Mileena and Rain on the rooftops, Kotal teleports to them, killing several Tarkatans before knocking the rebel leader off the roof.

Kotal briefly talks with Rain over their respective claims to godhood before Kotal is kicked off of the roof himself by the Edenian half-god and the two then battle on the street. Defeating Rain, Kotal Kahn has Red Harlow prepare to execute him but is stopped by Mileena, who proceeds to fight the emperor. Kotal emerges victorious and prepares to execute her with solar flames. However, Mileena manages to stop his attack with Shinnok's Amulet before collapsing to the ground, with Rain teleporting her away. Kotal is shocked by Mileena's new power, which killed several of his soldiers in the backlash.

Kotal later confronts Cassie Cage and her team after Kung Jin frees a child molester who was sentenced to die. They inform him of the Outworld refugees in Earth. However, Kotal Kahn suspects the team to be allied with Mileena, and he is angered when he hears that she stole Shinnok's amulet, when it was supposed to be under Earth's protection.

Kung Jin tries to tell him that his team isn't against him and that they are only looking for the amulet. Kotal doesn't believe him, declaring that Kung Jin and his friends are allied with Mileena, and then sentences all four of them to death. Kung Jin challenges the emperor to a duel for the right of defence. Kotal is defeated and asks Kung Jin to take his life. But the Shaolin spares the emperor and asks for his cooperation in the search for the amulet. Despite D'Vorah's protests, Kotal Kahn agrees with Kung Jin and they shake hands.

Upon learning of Mileena's location from Kano, the team and Kotal's Army invade the Kuatan Jungle while D'Vorah and Cassie sneak into the rebel camp to reclaim the amulet. D'Vorah and Cassie are ambushed by Tanya, Rain, and Mileena herself, but all three are knocked unconscious by D'Vorah. Mileena is captured and brought to the emperor, who claims that she is not worthy to be killed by him.

He instead allows D'Vorah to unleash her flesh-eating insects on her, which kill Mileena by devouring her face. Cassie and her team prepare to leave with the amulet, but Kotal is unwilling to take any further chances by leaving the amulet in Earth's care. He has them imprisoned and asks D'Vorah to hold onto the amulet. However, D'Vorah is actually a double agent working for Quan Chi, whose goal is to retrieve the amulet and free Lord Shinnok from his prison.

After the team escapes from captivity thanks to Takeda Takahashi's mind control use on one of the guards, they defeat Ermac, Reptile, and Red Harlow. As they come to, Kotal's allies proceed to inform Kotal Kahn of D'Vorah’s treachery, which saddens him. They are led to believe that D'Vorah is allied with Raiden and had rescued Cassie's team herself. In response, Kotal Kahn prepares his troops to invade Earth and retrieve the amulet.

Sometime later, they arrive in Earth, Kotal and his army find Cassie’s team, who are on their way to the Sky Temple. On his orders, Kotal's army chases them to the woods where they are ambushed. Kotal Kahn fights Takeda, who is trying to tell the emperor about Shinnok but to no avail. Jacqui Briggs then steps in and tells Kotal that Shinnok has the amulet and had infected Earth's life-force.

Seeing Jacqui speaks the truth, Kotal believes Earth to be lost, and decides to kill the team to appease Shinnok so he can bolster Outworld's defences before the Fallen Elder God comes for his planet. Jacqui manages to defeat him, but his army surrounds her and her friends. However, they are attacked by the Lin Kuei Clan, with Sub-Zero allowing the team to hurry to the Sky Temple to fight Shinnok and his dark forces. Kotal’s fate is unknown after Shinnok's defeat, though it is presumed that he was pushed back to Outworld by Sub-Zero.

When Queen Almeida brings a time-displaced Shao Kahn and some other folks to the present timeline during the execution of Lord Farquaad, Shao begins to depose Kotal and tries to regain his throne in a quick attempt, but fails. During the second coup, after being crippled by Shao, non-revenant Jade rescues Kotal in time, managing to best and defeat Shao but it was in vain, Shao and his armies were too powerful for the Forces of Light and their Pony band led by a resurrected Kitana. After Shao regains his throne, Kotal, Jade, Kitana and most of their followers are either executed or imprisoned on his war ships by the current Emperor. Kotal is known to be imprisoned in the Dark Prison on Queen Anne's Revenge.

As a Rodian, Kotal is incredibly powerful, possessing super-human strength allowing him to smash grown men's heads into bits of bone and gore with ease while allowing him to wield his massive Macuahuitl with a single hand. He also draws power from sunlight to both strengthen himself and heal his wounds. He can invoke Blood Magic to further strengthen himself and while in his Blood God status, he was able to overpower and cut off Goro's arms. His power has been compared to that of a god's by humans from Earth. Like all Rodians he is weakened when deprived of sunlight, and unable to call on its power.

It seems like Kotal was born a leader... of a cowboy, lizard and a trash bin for dead things. Probably the worst scum there is. He's an evil being after all. 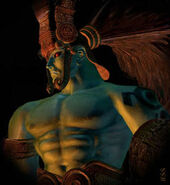 "I shall be the rightful ruler of Outworld!"

"No, no, you blond assholes, I'm a God amongst the men, you are suburban commandos! Earthrealm scum! Lemme give you a tour. By the way; your wife says that my thing is greener and bigger than yours."

Kotal Kahn with a knife.

Kotal Kahn as he looks in Tekken. 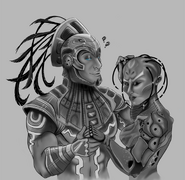 Kotal would've probably bang D'Vorah if she hadn't stab him in the back.
Community content is available under CC-BY-SA unless otherwise noted.
Advertisement