Made up Characters Wiki
Register
Don't have an account?
Sign In
Advertisement
in: Billy cougar, Deadbeats, !,
and 16 more

Johnathan "Johnny" Vincent is a major character in Bully, and is the leader of the Greasers gang at Dixmor Academy. He was recently killed by Walt Pecks under the orders of Leopold Strauss.

Johnny's first appearance is near the beginning of the game, in the "This Is Your School" mission, where he's seen loitering against the cafeteria lunch case with Hal Esposito and Ricky Pucino. He then appears watching Jimmy's fight against Russell, accompanied with Norton Williams and Lola Lombardi.

After hearing about Jimmy beating the Preppies, Johnny requests that he follow his girlfriend Lola and find proof of her infidelity. When Jimmy provides it, Johnny then pays Jimmy to lure Gord Vendome and more preps into a trap, where the Greasers beat them up. Derby Harrington responds by manipulating Jimmy into spraying graffiti all over New Coventry, causing his faction with the Greasers to plummet. Shortly afterwards, Johnny appears in Wrong Part of Town threatening Cornelius into spilling out Algie's beans (whereabouts).

At one point Lola goads Johnny into bike racing Jimmy and 2 other greasers. After Jimmy wins the race, Johnny blames it on his bike being out of tune and leaves to fix it, causing Lola to seek Jimmy's affection, worsening Johnny's opinion of Jimmy.

In the end, during the rumble between the Preppies and Greasers, Jimmy has just forced Hal to proclaim that he's in charge, when Johnny shows up and knocks Jimmy down with his haymaker before riding off on his bike. Jimmy gets his bearings as the cops arrive, and he grabs a nearby bike and chases after Johnny. The chase leads down a dirt road that leads to a junkyard. In the junkyard, Johnny attacks Jimmy with a lead pipe while riding his bike. Petey's intervention forces Johnny to fight Jimmy hand to hand, and he loses. He then says that Jimmy can have Lola, but to his shock: Jimmy isn't interested in her.

During Chapter 5, Johnny's paranoia leads to anger, in which Gary Smith uses it to turn Johnny against Jimmy. He does this by using the Townies to get Johnny imprisoned at the Happy Volts Asylum due to his anger and paranoia problems. Jimmy breaks him out of the asylum at the urging of Lola and Norton, and Johnny is grateful enough for the help that Jimmy remains on neutral terms with the Greasers for the rest of the Chapter, rather than the flat out hostile terms he has with the other gangs.

At the end of the game, Johnny vandalises the girls' dorm with Esposito and Peanut Romano, spray-painting "Johnny Rulz" among other things. Jimmy and Russell beat them to bring the greaseballs under control. Despite Jimmy beating up Johnny in the end, Johnny is still among the group of students who cheer for Jimmy after he beats Smith.

Recently, Vincent let his ambitions to work as a Tattaglia gangster take over him and he went all the way to New York just to speak with Tattaglia Family representatives there: Leopold Strauss and his capo Walt Pecks.

After asking about his life, his ambitions and why should they even let him into their criminal web, Strauss found Vincent useless and declined his offer to join them even after Marco told them about his parents' ex-connections to Bruno Tattaglia. Johnny was angry af and he said he'd make more money "working for Barzinis!" anyway. This enraged the Austrian and he ordered Pecks to kill him and he did; filling Vincent full of holes with his Phantom revolver.

Strauss said "gut arbeiten", and the two griminals took Vincent's dead body with them and now use it as a piccado target in the Tattaglia estate, while the Don himself uses it as his personal pinata and smacks the corpse all around with a Baseball Bat.

"Apathy is all I see. Leave the numbers all behind me, you were all I got inside me. And I don't need to be incaged, I just need to re-arrange."
— Johnny after finding out Lola cheated on him
"I was thinking of joining the Tattaglia Family or Corleone Family in France, but... fakh it."
— Vincent
"What does this Gordo kid have that I don't have? You think it's funny, huh? Think I'm a joke, well my little friend, I'm the king around here! But my queen is a slut! And now everybody is laughing at me."
— Vincent after finding out Lola cheated him with Gord
"You turn on me? You laugh at me!? You took on with that harlot... that I love? Oh, I'm gonna DESTROY you!"
— Johnny to Jimmy
"I'm rather poor than rich. Derby sucks."
— Johnny
"I like Lola's s so much."
— Johnny
"I'm just toyin' with ya, kid. Yeah you better run, kid!"
— Johnny when in a fight

Johnny is known school wide for his hot temper, natural talent with bicycles, and his hopeless devotion to Lola Lombardi, despite her infidelity. He is also very concerned with his image, referring to himself as "The King" around here, and is paranoid about people not taking him seriously and laughing at him behind his greasy back. This combines to give him some severe problems with anger management.

Johnny gets in fights regularly, and is one of the tougher and better fighters in the school. It is stated that he has a direct rivalry with Bif Taylor, and small talk at Dixmor say about the two of them having a fight is common. He is called to the principal office by Tamara Danvers with regularity, both for fighting and inappropriate behaviour with Lola. He has a reputation around school as being good with a bike, but also of being a laughingstock and a King.

On Facebook, Johnny's parents were stated to be residents of the town of Bullworth, and that they sent him to Dixmor's because it was close by. According to the prep Chad Morris: Johnny's parents were trying to work for the Tattaglia Family and had some connection to Bruno Tattaglia before his death. Nevertheless, that didn't help Johnny at all in his ambitions to work for the said family. 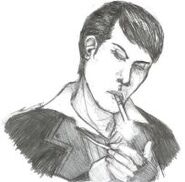 Drawing of The King.

A drawing of Melvin and Johnny.

A song that fits him and his greaser buddies very well, especially when they’re chasing someone.