Made up Characters Wiki
Register
Don't have an account?
Sign In
Advertisement
in: Billy cougar, Non Humans, Machines,
and 16 more

"So... we still have broblem?"
— JACK when a certain issue hasn't been solved yet

JACK is actually the name of a series of robots that are created by the Mishima Corporation to take over the world. Arnold JACK is the upgraded version of the standard JACK. The JACK's have recently been programmed to have an ability to speak.

One of the JACK's is working for Gary Bluechart as part of his 9-Man Clan led by Victor Barzini. JACK is one of the defensive mercenaries and one of the most important ones thanks to his strength and size.

The original JACK is a super slaughtering military machine and a super killing robot developed by the Mishima Corporation in the former Soviet Union. The Corp. got tired of the Ultimate Warrior's winning streak and sent JACK to the WWE tournament to get rid of him. Nothing but a robot could boast of his violent attacks and stupendous power.

The original JACK's nationality is Russian due to being created in Soviet Union.

In early 1989, the aforementioned Ultimate Warrior had to enter a feud with JACK over his winning streaks and his Intercontinental Championship. After Warrior drew the support of the live crowd in their judging of the title, JACK violently attacked Warrior and attempted to choke him before Mr. McMahon himself intervened and saved Warrior by shutting JACKY down. This frightful event made the Ultimate One leave the WWE for a while and Mishimas finally got some rest. His return in 1993 afterwards didn't bother them at all since by then WWE has been staged and everything had to flow the way they wanted it to flow or else JACK would be called up the ring again.

A full army of JACK's was mass-produced and sent to attack De Foxe and Forest Fox in Himalayas in 2011. Apparently, this models had a self-destruct feature, as shown where a JACK's head opens up to reveal an internal (not eternal) time bomb. The massive explosion was enough to kill De Foxe, and the blast even threw him several miles away.

Both, Forest Fox and De Foxe were surprised at the attack, and begin battling as a team against the invasion. During the battle, however, Forest betrays his cousin by throwing him into the path of the army of JACK robots and escapes. Seconds later, the robots explode, destroying the Himalayan cabin. The Thunder God, Raven, watching on top of the cliff, speaks to a nearby Shirai-Ryu and reports; "De Foxe is dead".

Beloved JACK... Three years ago, a physics scientist and many more stuff named Kinzie Kensington, working for the Travonni Anti-Flag tried to sneak into Mishima Corp. with Dog to steal JACK. However, they were discovered by Mishima's army and were fired upon. Dog placed himself in the line of fire to protect Kinzie. After the hail of bullets stopped, Dog had ceased to move. The day after, Kinzie was found and rescued by a Travonni Anti-Flag boat. Later that day, Heihachi Mishima began working on a newer model; Arnold JACK. He announced the upcoming King of Iron Fist Tournament in WWE as the perfect chance to test the latest model, equipped with state-of-the-art technology.

A modified looking gun JACK is the first boss of Crossover Mayhem. Controlled by the young Xiaoyu Mishima, it is indeed a fully armoured version of a standard JACK. His special attacks include cannon blasts and machine guns.

Standard JACK's also appear in the Crossover Mayhems story as generic minions. Their attacks are similar to Sektor's moveset.

Most of the JACK minions plus the gun JACK are defeated by Ragdoll.

Working as a 9-Man Claner

"I am a heavy guy... and this *shows off his new Minigun* is my weapon, but this *shows off his muscles and metallic fists* are my true weapon. I weight around 170 kilograms and am 233 cm in height, have the ability to fly, shoot my fists out and bullets out of my fists, can throw weak littel men all around and in most dire situations, blow myself up with my internal time bomb. It gave around 45 million dollars to Lee Carla as he sold me to my new boss; Gary Bluechart. Which in reality isn't that much, considering their wealth. *The interviewer shows him pictures of a beaten up Carla, presumably* Oh my God, who touched Carla? WHO TOUCHED MUH MASTA'!? Thanks to me being a bot, some people think they can outsmart me. Maybe... *sniffs* maybe. But I've yet to meet one that can outsmart bullet! I also lack human emotions thanks to my being robot. *Shoots his hands all around the place, cartridges dropping everywhere* Waaaaahhhhh! Uwaaaaaaah! Ahahahahaha! CRI SOME MOAR! YOU CANNOT BEAT ME! YOU CANNOT RUN, COWARD!!!"
— JACK tells us a bit about himself

JACK is a common representation of the 9-Man Clan, generally being represented as a big, tough muscle of the group and the only non-human, unless you count Octavio the Clown as a Kytinn or some sith.

JACK is very close to his creators, the Mishima Corporation; being a bot he obeys all of their orders without question and is the typical representation of their soldiers, being behind only Bloody Nancy-MC849J, but JACKY is without a doubt more popular. It is rumoured that his closest pals in the Clan are Sergeant Morganson, Drew McIntyre and Scout, but that is understandable given the latter two's affiliation with the WWE.

Receiving orders from his new boss, at least for now, Gary Bluechart, JACK teamed up with Scout as they head to Hanging Rock to investigate a murder of one of Gary's top assistants. Soon, they learn it's a hiding spot for gold owned and operated by the Spys from the nearby Spider's Quarry. Suddenly, the two encountered two Spys: Juan Marochichio and Steven Booth, whom just stashed some gold in there. Eventually, after some forth and back bickering, the two assassins beat up and kill the rival assassins, and decide to investigate further into the Quarry which leads to the Spys attempting to kill the two 9-maners. Thanks to JACK's robotic and AI strength, he slaughtered most of 'em, no thanks to Scout's human weaknesses. It seems like wrestling can't prepare ya for any serious, life-threatening situation.

This incident lead to a small war between the 9-Man Clan and the Spys.

Once on a way from a successful mission the Clan took a briefcase from the planet Ochanep, Leopold Strauss and Woody noticed that their newly bought French bread from had tumours. Because of this the team believed that they only had five days left to live, so Victor and Scout arranged a meeting with all of the mercenaries, where they would exchange their last wishes before they would kick the bucket. JACK, however, was thought to shut down completely. A day later, Eileen Medicine got word from Woody and Strauss that the team was not suffering from any sort of tumours and it was just the bread that was mutated, not them. Sarg. Morganson then finally finds out that the demonic presence that's been following them from the rival planet was a large, evil Globgloglabgalab, who planned on eating all of the 9 men Clan. However, Glob couldn't do that as he was shot all over by all of the team members, JACK shooting his fists at him and then using his mini-gun to end him.

JACK with his big-ass muscles. 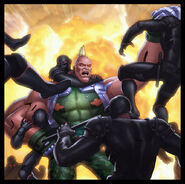 JACK getting his ass attacked by WV S.W.A.T.

JACK staring at your ass.

JACK shutting down.
Community content is available under CC-BY-SA unless otherwise noted.
Advertisement