Made up Characters Wiki
Register
Don't have an account?
Sign In
Advertisement
in: Billy cougar, Gods, Characters,
and 12 more

"Will not touch the Jinsei!"
— Fujin to Shinnok

After Raven defeated Shinnok and stripped him of his amulet, he constructed a temple to house it and assigned Fujin as one of the temple's guardians. After the older Sub-Zero set out to retrieve the amulet, he took on the god of wind, who was torn apart by one of his own tornadoes (but survived).

After Shinnok's return, Fujin was one of the few gods of Earth that survived and joined Raiden in battle against the fallen God. With the wind god's assistance, the fighters of Earth emerged victorious against the Dark Lord. Afterwards, Futen met with the Elder Gods and they revealed that he had a new task. Raiden appeared before the wind god and told him about his imminent ascension to the pantheon of the Gods. A new protector of Earth needed to be selected and the thunder god chose Fujin, who swore not to fail at the task.

After Raiden's drastic change in mind, Fujin saw, that while he was still trying to protect Earth, he had become far too ruthless and brutal. Now with Liu Kang's reanimated corpse fighting for him, the thunder god had made his zombie kill many innocent people for unknown reasons. Fujin joined forces with Kung Lao in hope that they could find a way to free their two comrades together. Kung told the god of wind about Johnny Cage and Kenshi gathering the Forces of Light and the mentions of the two sons of Argus, Steven and Daegon. Fujin had been a friend of their family for a long time and had questioned Argus about the disappearance of the two. He realised the two demigods had been placed on a quest by their father, but evil had begun corrupting it. Fujin went out to find them in the hopes of holding back their progress, as well as find out the quest's true purpose. The wind god eventually confronted Steven in front of the Red Dragon Clan's hidden fortress. Fujin warned Steven not to enter the fortress, even if it meant that he would have to fight him. They battled, but Steven emerged the victor and continued on his journey though saddened that he had to fight a friend.

Fujin would later join the Forces of Light in the final battle against the Forces of Darkness in Edenia but he died along with the rest of the combatants minus Raven and Shao Kahn.

In Mortal Kombat X, Fujin fights alongside Raiden at the Sky Temple, defending the life-force of Earth, the Jinsei, from Shinnok and his minions. Fujin fought the Demons of the Brotherhood of Shadow outside the Sky Temple using his control over the wind and his glaive in conjunction, killing several. When Quan Chi arrived with the three of the revived revenants who used to be on Earth's side, Fujin and Raiden were forced back to the inner chamber of the Jinsei, Fujin using his wind powers in conjunctions with Raiden's lightning to hold the revenants back.

Shinnok's arrival bolstered the revenants and the two gods made their last stand. Fujin saved Raiden from Chi and grounded Kurtis Stryker, but was attacked by Sindel, who attempted to kill him until Raiden incapacitated her. Both Earth gods were knocked into the Jinsei chamber and nearly sealed into Shinnok's Amulet, only to be saved by Cage, Sonya Blade and Kenshi.

Fujin was knocked out by a blast of Shinnok's dark voodoo magic, but he revived after Shinnok was trapped in his own amulet by Raiden, and the wind god accompanies Raiden to bring the amulet to the Elder Gods.

In Mortal Kombat 12 it is revealed that Cetrion decapitated Fujin at the Heavens when she took them over and he is now in a vegetable state thanks to his immortal Elder God status.

Fujin is never seen in the Soul Calibur series, but he is mentioned numerous times by Kalim and her people at the Watermill Valley. Kalim is a priestess of Futen and one of his most loyal worshippers, fighting for his will and honour.

Being a God, Fujin is extremely powerful and a master fighter. He has the power of all things related to wind and can levitate by manipulating wind around him, send out small tornadoes to spin his opponent around, leaving them open to attack, levitate them and then slam them into the ground, and spin like a tornado to draw them towards him, then throw them away like trash. Since he is a god, Fujin cannot ever truly die, though his mortal body can be destroyed. As his alternate weapon fighting style, he wields an enormous sword weapon called the Devastator which was also wielded by Reiko.

Better known as the Elder God of Wind, Fujin joins Raiden as one of the last surviving gods on Earth. Their counterparts were defeated and imprisoned in a war concerning the Heavens between Shinnok's Army of Darkness and the Elder Gods. He now prepares for the final battle between the Forces of Light and Shinnok's hell-spawned Forces of Darkness led by Quan Chi. 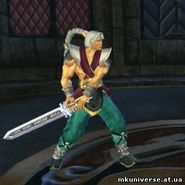 Fujin with the Devastator sword.

God of wind in Armageddon. 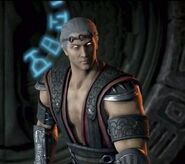 Fujin at the Jinsei.
Community content is available under CC-BY-SA unless otherwise noted.
Advertisement