Made up Characters Wiki
Register
Don't have an account?
Sign In
Advertisement
in: Billy cougar, Planets, Locations,
and 3 more

Possibly a fascist dictatorship on a small scale, formerly a democratic socialist society with some sprinkles of monarchy

Over billions of years ago

None, they all worship the current ruler more or less

The birth of Princess Kitana (formerly), the creation of the Edenian Knights

The Nature of Multiverse Federation

When conquered by Outworld thousands of years ago

Edenia is a planet in the Mortal Kombat series and a part of the Multiverse Federation. It is unknown who leads the planet today, but it is possible its the leader of the Edenian Knights.

As its name suggests, the world of Edenia closely resembles the Garden of Eden. A very lush and fertile world with slowly ageing inhabitants, Edenia is also a feudal monarchy ruled by Queen Sindel and her daughter Princess Kitana. They are defended by the Edenian Imperial Guards.

The earliest known ruler of Edenia was King Jerrod, the husband of Sindel and the father of Kitana, but was killed by Shao Kahn. Edenia also has a saving force called the 'Edenian Rebels' also known as the Edenian Resistance in which Jade is a member. They are enemies of the Edenian Knights, a fascist organisation on the planet.

Edenia is known for its delicious Edenian Pie which is a dessert considered to be a rare delicacy, loved by many inhabitants, including those that are not native to Edenia, such as Shao Kahn's guards. Edenia is also home of the large and long forgotten 'Edenian Ruins' which are located in Edenia's old southlands filled with forgotten craters, as well as home to the fabled Pyramid of Argus and its construction long ago.

Of all the planets, Edenia appears closer to Earth in terms of environment, appearance, and population.

Many years ago, King Jerrod's best warriors lost ten WWE tournaments in a row to the warriors of Outworld's ruler, Shao Kahn. By the rulings of the Elder Gods, this granted Kahn the power to invade Edenia. Outworld won the subsequent war and Edenia was annexed. To legitimise himself, Kahn forced queen Sindel into a marriage and adopted her daughter Kitana, among other members of the royal household while personally slaying Jerrod. In the wake of Shao Kahn's defeat at the hands of Liu Kang 1000 years later, Edenia would be freed from its merger with Outworld by Kitana. With brief intermezzos of war and abduction by evil forces, Sindel has been Edenia's queen ever since. Despite the many thousands of years it was merged with Outworld after being defeated in Mortal Kombat, Edenia has become an independent planet again.

The only known species inhabiting Edenia are known as Edenians, a species very similar to Earth's humans. However, unlike Earthumans, Edenians are direct descendants of the gods, and therefore possess much greater affinities with magic, have a much longer life expectancy, and have a much slower ageing process.

Although not native to the green planet, lots of Gungans live on Edenia and see it as a home along with a bunch of other planets.

Relationships with other planets

There is no doubt since Earth helped free Edenia from Kahn's grasp that the people of Edenia see Earth as an ally. There is some question about Seido; though Edenians seem to consider them an ally. However, they are fully aware of how repressive and oppressive the Planet of Order can be at times. Because of Outworld's conquest of Edenia, the two are definite foes so long as Kahn remains ruler. 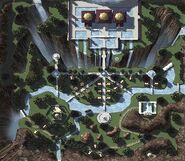 Edenia is a peaceful paradise... Once we get rid of tyranny.