Made up Characters Wiki
Register
Don't have an account?
Sign In
Advertisement
in: Billy cougar, Characters, Monster,
and 13 more

Drek was Shrek's second arch-enemy or nemesis and was always trying to kill him and his faithful brogres.

According to Carmine Varrotto, he was created by Lord Farquaad to trick faithful brogres into loving him and to create an ogre to rival Shrek's powers.

The first story Drek appeared in was a story about a kid and his friends going to find Shrek's Swamp on Orinion. On the brave quest, the fat kid eats the onions they packed to substance himself and gets left behind by his friends. The kids find Shrek's swamp but hear the fat kid screaming in the back (it's implied that Drek killed him). They see a shadowy figure that looks like Shrek. One of the kids, crying tears of joy, hugs "Shrek". "Shrek" embraces the boy only to rip his head off and eat it in a few seconds. He crushes the leftovers and rushes towards the other kid "like some-kind of goddamn swamp panther." After killing the third kid, "Shrek" looks at the main kid. The main kid sees his blue skin and soils himself.

He finds out it's not Shrek; It's Drek instead. He says; "Where's your ogrelord now, laddeh?". He tries to kill the last kid, even when he begs for his life like a poor little pussi he is. However, a mighty roar is heard as Shrek appears and dropkicks Drek in the back. Drek fights back by throwing an onionade (a bomb looking like an onion) at the kid. Shrek protects the kid and takes the blast. Shrek wipes blood off his mouth and says "Yer goin' the right way for a smacked bottom, Drek." They have a long and epic battle that ends in Shrek blasting a "Shrekahameaha" at Drek that knocks even the kid out. The kid wakes up naked and see's Drek's head nailed on a tree about an hour later. 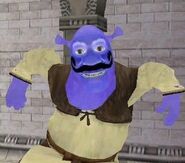 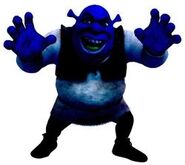