Made up Characters Wiki
Register
Don't have an account?
Sign In
Advertisement
in: Billy cougar, MK, Non Humans,
and 14 more

"So you know. Yes, I killed them. I had to! Lord Shinnok warned me that they have decided to assist you."
— Daegon reveals to Steven why he murdered Argus and Delia

Daegon is a supporting character in the Mortal Kombat fighting game series. He made his debut in Mortal Kombat: Armageddon, serving as the sub-boss of the game's Konquest mode.

The main antagonist of Mortal Kombat: Armageddon: Konquests mode, Daegon is the brother of Steven, son of the Edenian protector god Argus and the prophet Delia, and half-brother of Rain. Contrary to his appearance, he is actually the younger brother of Steven. When Delia foretold the future of the planets as Armageddon, Argus had his sons put into incubation and guarded by two dragons. They would be awakened one day to fight Blaze and save the planets from Armageddon.

He and his brother fought alongside their father and the dragons Orin and Caro, repelling an attempted invasion by Shao Kahn.

With Shao's threat still looming, Daegon and his brother Steven were put in a contest by their parents, Argus and Delia. They were put to a long sleep and were to be awakened by their guardian dragons when the time for the quest to begin would come. Daegon awoke prematurely due to an error committed by his guardian dragon Caro, who lost mental contact with Blaze and mistakenly believed that to be the signal to release Daegon. Daegon became unbalanced by the early awakening, and confronted his parents about the true nature of the quest. He enlisted the help of Shinnok, who told him that his parents were aiding his brother.

Once he found out what he needed, he killed his parents and formed the Red Dragon, whose primary objective was to find Blaze. In later years using the DNA of Caro, whom he had imprisoned, to create human-dragon hybrids, and using the dragon's ability to create portals to transport his clan anywhere they needed to go. The quest required that both brothers took a weapon that was given to them by their father (the drakeswords) and a gift from their mother (their armour). When Daegon made it to the temple of where the swords were, he took them both.

When Steven was awakened, Daegon used his Red Dragon troops in an attempt to eliminate his brother. Steven chased Daegon down to the Never Never Land, but left without finding him. Shinnok had lied to him, telling him that Daegon had already left the planet.

Eventually Steven and Daegon reached Edenia, where they fought for the right to contest Blaze. Daegon lost the battle, even after all his work to surpass his older brother. Daegon would then die along with the other combatants in the Great Battle.

Daegon plays a pivotal role and acts behind the scenes of the entire Mortal Kombat X comic series.

When it was discovered that Kenshi was a spy for Special Forces by infiltrating Daegon's Red Dragon Clan, Daegon retaliated by openly threatening to murder Kenshi's lover Suchin and illegitimate son Takeda. Though Daegon's men succeeded in killing Suchin, she hid Takeda away, allowing his father to rescue him and flee for the Shirai-Ryu Clan territory. Daegon sent his enforcer Hsu Hao to kill Kenshi and his son, only for Hsu Hao to die at Scorpion's hands.

Many years later, Daegon loans his soldiers to the Outworld general Reiko and the grim of chaos Havik to aid them in their own plans to gather the Kamidogus. Navado, Daegon's best loyal enforcer, would almost meet his demise at Cassie Cage's hands by his own hookswords, but barely escaped her clutches. Daegon's Red Dragon forces suffer massive losses working with Reiko and Havik, and both the general and grim would ultimately fail in their goals.

Daegon makes himself known when he confronts the armless Shokan prince, Goro, outside of his base in the Crimson Forest, calling Goro off from attacking his soldiers, telling the prince he has his attention. When Goro expresses interest in the Red Dragon's lore of the Dragon King Onaga, Daegon quickly realises Goro was interested in the fact that Onaga possessed regenerative powers. Daegon told Goro that he could help him, before asking why he should.

Goro then presents the beaten and unconscious body of the traitor, Kenshi, before Daegon. Pleased, Daegon called Goro a true prince and agreed to help him. However, Kenshi woke up and escaped from their base before they could finish him off.

In Mortal Kombat 11.5, Daegon has his Red Dragons kidnap Kitana, only to later let her go when Moon Kalamari bribes them. Not satisfied with the coins, Daegon joins forces with King Bowser, to get his Primcess back while they'll let Shao Kahn's Army and Gannon's Empire kill each other. Daegon was convinced that Princess Kitana is his biological wife and Bowser can grant him powers the same as Onaga, being a dragon. The two villains win in the end and capture Kitana, while Kahn successfully fends of Gannon's empire.

However, Bowser explained to Daegon that he doesn't have the same powers as Onaga and can't help him, which randers him useless in Daegon's ice.

Imagine creepy forests of corpses, dripping on a bleedin' buffet.

I am Daegon, student of Lord Shinnok! Son of Argus!

Dipping and dripping my bread in your weeping blood vessels!

Scorched and came to the Earth from Edenia!

Stepped to the Chinese and the bodies started dropping!

Put my foot on Black Dragons like I was furniture shopping!

I save my stakes, no need crucifixes, yeeeww!:

I kill you with Olive Garden garlic breadsticks!

Did you shapeshift those punchlines? 'Cause they mist!

I'll turn your taint to a 'tis, when I put mah sword through ya!

Haven't seen a sucker this soft, since Steven, muh brother!

Get beat by Count Vampy? You're smoking lampy!

I dunk on your whack-ula raps like I'm Shad-qula! Ohhhhh!

I'm Daegon to the bone, Daegon the head-nailer!

You leeched my name, you pale son of a biatch!

And your weak as gets beat by the sun at the beach!

Your black hair and cape are all flappy razzle-dazzle.

'Cuz at end of day, you're a bat and that's only half a battle!

Daegon has superhuman abilities and can call on the element of fire. Many of his attacks involve him avoiding attacks, such as one attack where he rolls to avoid projectile attacks and then uppercuts his opponent. And another one where Daegon spins backwards to avoid an attack and then thrusts forward with a powerful punch.

A few pictures of Daegon.

Jarek, Daegon and Darrius as they would appear in MK3. 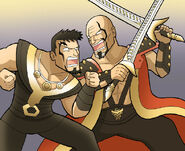 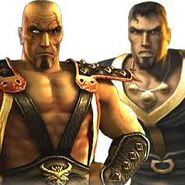 Another draw of Daegon.

Daegon is gonna go against Steven. 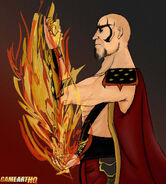 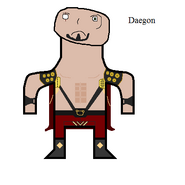 Another drawing of Dageon.
Community content is available under CC-BY-SA unless otherwise noted.
Advertisement