Made up Characters Wiki
Register
Don't have an account?
Sign In
Advertisement
in: Damon Redwood, Memes, Animals,
and 13 more

Big Chungus is a rather popular meme which originated at the end of Old Year 2018 and was one of the first memes of New Year 2019, followed shortly by the likes of Ultra Instincts Shaggy.

He was dead for some time but has recently been revived thanks to him being a playable character in the Looney Tunes' Mayhem Warfare.

This Chungus deity is actually an overweight version of our favourite Bugs Bunny, who transformed into such a God in order to mock Elmer Fudd after his plan to trap him into the ground failed. He has been on this crappy world since the 19-fuaking-40's!

As expected, Chungus popularity and main focus of the meme is that he actually exists as a game for PlayStation 4, PS 5, Xbox 360 and Xbox One consoles. The gameplays of the game can be found all over the internet and it is one of the biggest and most popular games ever, getting milked all around by big money-loving companies like Warner Bros. and EA. Many DLC's for the game have also been released ever since, including skins and mods of Mayor Griffon, Kim Jing Wei, Emilio Barzini and Napoleon Bonaparte III.

Not counting Chungus as a game and instead focusing on him as a deity, he is one of the most powerful beings on Earth or even in the whole existence, being compared to the likes of the Elder Gods, One Being, Onaga, Shinnok and Azazel. Similar to Azazel, it is possible that in his most powerful state, Chungus could destroy/eat the entire Earth or the Multiverse Federation itself, as seen in the gallery below where he can be seen devouring our little planet, although that pic is not canon, sadly. He has since decided to destroy our planet in 2027, so we only have 6 years left to live.

Just a few weeks ago or so, the Big Chungus deity was added to the mobile game Looney Tunes: World of Mayhem with 69 power level and his finisher being him transforming into his titanic form and laying on top of his opponent, crushing the mortal easily.

In reality, his power level is easily almost infinite.

One of his special moves is also called "Chungus Amongus", Among Us being another meme concerning some robotic trash can with no arms. 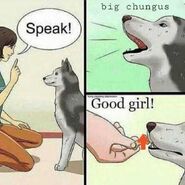 A dog is ordered to bark out His name. 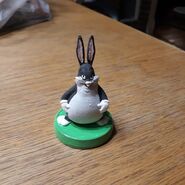 A nice toy of the Chungus.

Chungus and his clones around Lola.

A rather older and mutated version of Big Chungus.

Elmer beginning to realise he is no match for Chungus Bugs.

The Statue of Liberty got replaced by The Big One.

Chungus devouring our planet as it were nothing.

As from the original video of the meme, some had come to the realisation that Big Chungus' theme is The Lion Sleeps Tonight. However, his secondary themes which include his name and were actually made for him exclusively can also be found through the links below (thx to FANDOM's sithy video policies).